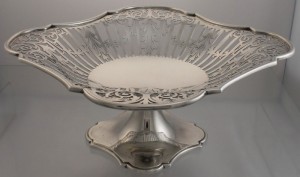 While looking through several books on antiques and searching on the Internet, I found the words compote, comport, and tazza interchangeably used to describe footed bowls or plates. For instance, several Millers’ antique books use all three. Table 1 gives some statistics of their use on select websites when viewed on the 13th of June, 2013.

Table 1: Instances of Tazza, Compote and Comport to describe footed bowls or plates.

Still very confusing, but things do not look so good for the use of COMPORT. Let’s look at Webster’s Dictionary definitions. (Source: http://www.merriam-webster.com)

Definition of COMPOTE
1: a dessert of fruit cooked in syrup
2: a bowl of glass, porcelain, or metal usually with a base and stem from which compotes, fruits, nuts, or sweets are served

Origin of COMPOTE
French, from Old French composte, from Latin composta, feminine of compostus, past participle
First Known Use: 1693

Definition of TAZZA
1: a shallow cup or vase on a pedestal

Definition of COMPORT
intransitive verb: to be fitting : accord
transitive verb: behave; especially : to behave in a manner conformable to what is right, proper, or expected ‘comported himself well in the crisis’
— com•port•ment noun

Origin of COMPORT
Middle French comporter to bear, conduct, from Latin comportare to bring together, from com- + portare to carry — more at fare
First Known Use: 1589

It seems that COMPORT is misused to describe a bowl or plate on a stand. The difference between COMPOTE and TAZZA is that a TAZZA can be purely ornamental or functional while a COMPOTE is strictly a serving dish for food. Also, a COMPOTE is more likely to have a cover or lid in order to protect its contents.

Now that my OCD has been fully indulged, browse our great selection of tazzas and compotes on our website: http://www.thesilverwareguy.com/3048-bowls.

7 thoughts on “What is the difference between a COMPOTE, COMPORT and a TAZZA?”